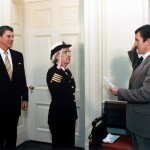 The mother of the COBOL computer language, Rear Admiral Grace Brewster Murray Hopper, readily torpedoed the words “We’ve always done it this way”, citing this expression as a most damaging phrase in any language. Regarding the ways in which we do, in fact, communicate, she insisted “we must have a language and a structure that will take care of the data descriptions and priorities, as well as the operations we wish to perform.” Ms. Hopper, a pioneering computer scientist for the U.S. Navy throughout the 20th century, won the first Computer Science Man-of-the-Year Award in 1969, and today you can find her motto “Dare and Do” affixed to the active guided missile destroyer the USS Hopper. So, Ms. Hopper demanded more structured, efficient, and meaningful languages than those used in the past. And the World Wide Web is amidst an ever-progressing shift in how languages construct structured web documents, for those languages to signal and deliver even more precise meanings to search engines, optimizing the relevance of the search results (operations) we produce (perform) every day. The Semantic Web (once known as the ‘Ontology Web‘) connects logic with language to produce meaning. Web engineers use semantic technologies such as referenced ontologies (e.g., Schema.org). Web technologists are also standardizing emerging industry-specific ontologies, or industry-normative taxonomies, to serve Line of business (LOB) semantics (i.e., domain-specific ontologies) for newspapers, libraries (e.g., LOC MOD), project management, art museums, biomedicine, biochemistry, genetics, the Life Sciences, IT services, the insurance industry (in tandem with ACORD), the mortgages industry, automobile manufacturers and car dealers, a comprehensive Semantics of Business Vocabulary and Business Rules (SBVR) standards, the eXtensible Business Reporting Language (XBRL) standard, the travel industry, and across financial institutions ontologies, within that industry. Seems like we’ve some a long way from stuffing keywords into web pages, now that we are applying syndetic (connecting) structures to syntactic semantics (Schema for indicating ‘meaning’), and an exhaustively thorough understanding of semantic ontologies was updated just last September within the Object Management Group’s — the OMG‘s Ontology Definition Metamodel (ODM) — with XML Metadata Interchange (XMI) files included. 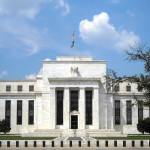 But what of banks as institutions themselves — how might they more effectively:

a) Communicate more efficiently with other banks (e.g., buy & sell others’ loans);
b) Provide transactional transparency for regulatory authorities (e.g., comply with U.S. Treasury and Federal Reserve Board regulations), and, most importantly;
c) Speak more precisely and transparently with savings & loans consumers?

In considering the depth of FIBO’s orchestration, standardization, and the importance of FIBO for the financial industry, Caliber called upon Elisa Kendall, a principal at Thematix Partners, an Object Management Group (OMG) architecture board member, and key contributor to the Financial Industry Business Ontology (FIBO). [Note Ms. Kendall’s presentation, “Ontology Engineering in UML“.]
Question: “What is the impact of FIBO for the financial industry, to date?”
Answer: “FIBO has been the occasion for a wide range of industry subject matter experts [SMEs] to weigh in on the vocabulary that they use from day-to-day. This is perhaps the first time the industry as a whole has coalesced on standardized terms of art. What makes this lexicon different from any other is that it is rendered as an ontology, enabling not only clear and unambiguous communication between human beings, but as well, reasoning and classification by machines. This ability could conceivably avoid the next meltdown.”

What are the SEO ramifications connected to FIBO’s arrival? Caliber’s Emergent SEO is based on Schema, and Schema (along with other methods of applying structured data vocabularies to web documents, such as RDFa and JSON-LD) is derived from industry-specific lexicons. As FIBO matures to standardize the structures within its vocabularies’ terminologies so will those frameworks yield even greater utility within the Semantic Web — the Ontology Web — providing much more precise search results (i.e., “findability“) for the financial institutions that have implemented this explicit, specific and rigorous markup to the respective financial services and financial instruments. Beneficiaries will include commercial banks, brokerages, credit unions, investment banks, insurance agencies, foreign currency exchanges, and other financial services entities‘ offerings.
—–
Update, May 2015: Schema.org has assembled a select working group, working under the project title of FIBO.Schema.org, and Caliber Media Group will be assisting in setting the Financial Industry’s Schema.org Ontology.
And, here’s a sneak-peak into FIBO Schema as proposed/developing within Schema.org December, 2015.
—–
Side-note | Addendum
Federal agencies that are (or will be) involved in FIBO developments:
Bureau of Consumer Financial Protection (CFPB)
Commodity Futures Trading Commission (CFTC)
Federal Deposit Insurance Corporation (FDIC)
Federal Housing Finance Agency (FHFA)
Federal Reserve Board (FRB)
Financial Stability Oversight Council (FSOC)
Government Accountability Office (GAO)
Municipal Securities Rulemaking Board (MSRB)
National Credit Union Administration Board (NCUAB)
Office of the Comptroller of the Currency (OCC)
Office of Financial Research (OFR)
U.S. Securities and Exchange Commission (SEC)
U.S. Department of the Treasury

Gee, comprehensive much, Chris? This is like some sort of OMG FIBO Ontology Schema reference guide. Your portion considering Admiral Hopper threw me off, at first, but then I quickly got the connection of her structured data efforts for COBOL with the structure/ontology efforts on the part of EDMC for FIBO, Schema, and then the SEO section. Oh, and I didn’t notice that Caliber’s a member of EDMC — congratulations.
Thanks!

OK, Caliber, I get it, at least I think so. The semantic web isn’t a serendipitous endeavor, like conversations talking most often are, and is instead some/an integration of ‘highly’ (methodically) structured data/elements in order to lend meaning to the raft of items already published (and that’ll be published on the web today, tomorrow, and so on). So, from the work of folks at OMG & EDMC, along with banks and regulatory agencies, a banking language will emerge that’ll “render transparency” both among fin. svcs. entities and between those banks and the SEC, etc. Then, that structure will be blended-over into Schema.org, Freebase (I mean, from you’ve posted elsewhere, over to Wikidata.org), then all of the stuff that banks and brokerages and insurance agencies offer will be more “transparently” discoverable by the public using search engines. Right? I mean, I think that is the long-version of a TL;DR.

Jan, we just edited your spelling on serendipity, that’s all, and you response is an exact TL;DR to what we are getting at regarding FIBO, Schema, and SEO. Thanks tons, and we hope spring comes soon to New Jersey!

This weekend I heard a piece, as part of the celebration of International Women’s Day, about Admiral Hopper, “Grace Hopper, ‘The Queen Of Code’, Would Have Hated That Title”, on NPR: http://www.npr.org/blogs/alltechconsidered/2015/03/07/390247203/grace-hopper-the-queen-of-code-would-have-hated-that-title/
There also a new movie about her, “The Queen Of Code”, that is cited and linked.

Tweet. Done. Very informative! Thanks for sharing such valuable info with the community.

At this moment I am going to do my breakfast,
later than having my breakfast coming again to read additional news.

Interested in how FIBO is expressed in RDF?
http://www.omg.org/spec/EDMC-FIBO/FND/Organizations/FormalOrganizations.rdf

And yesterday this article was published:
Schema.org: Evolution of Structured Data on the Web
http://queue.acm.org/detail.cfm?ref=rss&id=2857276
By R.V. Guha, Google, Dan Brickley, Google, and Steve Macbeth, Microsoft
“Separation between content and presentation has always been one of the important design aspects of the Web. Historically, however, even though most Web sites were driven off structured databases, they published their content purely in HTML. Services such as Web search, price comparison, reservation engines, etc. that operated on this content had access only to HTML. Applications requiring access to the structured data underlying these Web pages had to build custom extractors to convert plain HTML into structured data. These efforts were often laborious and the scrapers were fragile and error prone, breaking every time a site changed its layout.”

Internet of Things & The Search of Things