The Internet of Things (IoT), codified in 2013 by Internet of Things Global Standards Initiative (IoT-GSI; now led by the ITU-T SG20), has such a wide range of applications that it can grow beyond our expectations. IoT is the internetworking of physical devices, vehicles, structures and other items embedded with electronics, software, sensors and other network connectivity that allows these objects to collect and exchange data. IoT provides network connectivity, connectivity management, data analytics, management and automation, security, embedded networks and other applications. An example of IoT would be “smart” thermostats that learns what temperature you prefer and builds a schedule around yours. It uses sensors and real-time weather forecasts along with the actual activity in the home throughout the day to keep your room temperature comfortable and save in energy bills during the process. 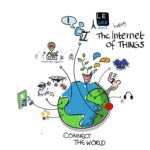 Although IoT has been springing up in private partnerships, the open-source platform is gaining more momentum. Recently, GE and Bosh utilized the open source platform through the Eclipse Foundation to make IoT software components work together.

The open source platform tends to be more advantageous than a private platform. For instance, the Google Cloud Platform is integrating its public cloud, which offers greater scale and better security than private in-house IoT platforms.

There have been six distinct types of applications emerging in two broad categories: information and analysis, and automation and control. Information and analysis includes tracking behavior, such as shopping behaviors and preferences; enhanced real-time situational awareness of the environment, such as detecting the location of a sniper shooting; and sensor analytics, such as continuous monitoring of chronic diseases to help doctors evaluate treatments. Automation and control includes process optimization, such as automated control of manufacturing lines; optimized resource consumption, such as smart meters and energy grids that match load capacity to lower costs; and complex autonomous systems, such as collision avoidance systems to sense objects and automatically apply brakes: The many applications of IoT across all sectors of industries will make the IoT platform beyond our imagination. Having an open-source platform for developers to join and not have disparate, private IoT implementations, will assist the IoT in its further growth, much like the early days of the Internet.

The usage of IoT applications in particular has been in the fleet trucking and automotive industry. For instance, the OBD-II (On-board diagnostics) provides diagnostics of repairs through its digital signaling. It monitors DTCs (Diagnostic trouble codes) that a technician can query on the on-board computer on any vehicle, since the codes are standardized. Most manufacturers have made the Data Link Connector or the main connector of all systems in the vehicle to diagnose and reprogram. Custom parameters can also be met for more specific data.

The Internet of Things (IoT ) and Machine to Machine Learning (M2M )